The note is written in a brown ink sharpie and attached to a bottle of Cabernet Sauvignon in my fridge. It says “Take a Break.” 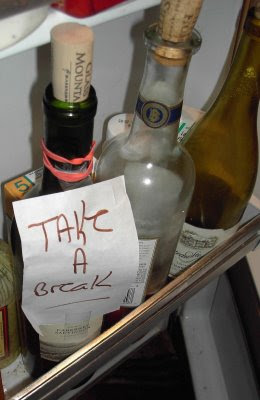 No, it’s not in my wife’s handwriting. It’s in my own.

Personally, I don’t think I drink too much, but over the last couple of months I’ve gone from not having a drop of alcohol for over a decade to drinking two glasses of red wine every night when I get home from work.

I don’t think I have a problem, and my HDL, in the mid-50s has never been better and is spectacular for a man. No elevations in liver function either. So what’s the problem?

My wife perceives that I drink too much. She’s Hispanic, remember, and the drunk husband fear probably exists on a genetic level for her after so many generations of that being a really big problem in these parts.

So I took a break. Do I miss the wine? A tiny bit. But it was no big deal.

Besides I still have women and song.

If you are giving up something, shouldn"t you get something?