Rio’s home work was to write a very short story about his favorite part of Thanksgiving.

He was totally stressed out. “But I like all of it,” he objected, as his Mother pushed him to focus in on just a few things.

Debbie and Rio. Two forces of nature, if there ever where a pair.

I stepped in to save my son, well, just tell me a few of the things you like, I told him. I expected turkey, stuffing, or pumpkin pie.

His little face scrunched up as he concentrated. “Well….”

Then the damn burst, “Well, I’m thankful for the planet,” said Rio. “And for the sun. And for water. And for my family. And for my teachers.”

And I was blown away. This is one deep thinking kindergartner. Then, slowly, with great effort he began to write. “So how do you spell ‘thankful?’” he asked. 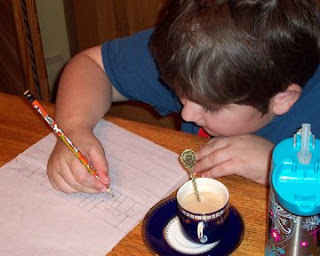 Debbie and I exchanged smiles. Is it one ‘l’ or two? I hissed under my breath, spell-check having totally destroyed what limited spelling skill I had in the first place. One letter at a time, my little guy started writing his first story, carrying on a family tradition of writing that goes back more generations than we can count.

Boy, am I proud. And thankful. In fact, I have much to be thankful for.

Without diabetes I’d be less healthy. Now I think about what I put into my body.

Without diabetes I wouldn’t have had the pleasure of ‘meeting’ all of you.

Without diabetes I wouldn’t have an interesting job that lets me help people every day of the week.

Without diabetes, what would I have to write about?

Yes, I have many blessings in my life, and diabetes is one of them. Without diabetes, I would not have found my calling.

And for that, I am thankful.

Oh, and the planet, the sun, and water are all pretty great too.

Nice sentiments.I can't wait til my son feels that way and gets it. My mom, a nurse, says a chronic condition usually makes someone take care of themselves better. Happy Thanksgiving.

Happy Turkey Day, Wil.
And congrats on your book!!

I'm thankful for diabetes too, so you aren't the only one. Happy Thanksgiving!