White. All I can see is white. I’m floating in a cloud, seeing nothing, feeling nothing. The surgeon’s voice, however, is clear. He’s lecturing. Enjoying the audience “…now this is the base of the epidermis. Below that you can see the dermis; and this is the start of the sub-q tissue….oh yeah, this is a deep one…”

“This is sooooooooo cool,” says my mate. She is really digging this. Uh-huh, just when -- after 20-years -- you think you know someone. Having two turbo-charged vehicles at her disposal has brought out her inner-wild woman. Now it also turns out medicine turbo-charges her mind. What other delicious surprises await me?

Then, feather light and warm, I feel her touch on my hand. Then, more pressure on my left cheek. The surgeon is pulling, cutting, pulling some more. The lidocane has removed all sense of detail. Something is going on, but I have to rely on the disembodied monologue for clues. My senses have been removed, I’m flying blind…..

It all started about two weeks ago, when my face blew up. Literally. The entire left side of my face looked like it belonged to a man a hundred pounds heavier. There was much discussion where I work on what had befallen me, as nothing quite added up right in terms of color, speed, and shape. I couldn’t even follow nine-tenths of the conversations. The doctors I work with sometimes forget I’m about 800 times stupider than they are on every medical subject in the world except diabetes….and having one’s face blow up isn’t a common side effect of diabetes. Or even an uncommon one, for that matter.

One end of the spectrum was “zit gone bad” and on the other end was “mumble, mumble” no eye contact and, “let’s just wait and see.” Translation: some sort of cancer. So began the ping-pong ball game of go see this specialist and go see that specialist.

I didn’t care what was in my face, I wanted it gone. Right now. It was the enemy. It did not belong.

Once my face began to shrink to its normal size, I had a huge mass in the middle of my left cheek. It felt hard, was about the size of a shooter marble, and it was resting against one of the spider web of nerves that crisscross the face. Every time I laughed or smiled I got shooting pain that whipped across my face and around my head.

I had no idea I laughed so much.

I was fucking miserable. 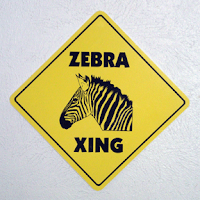 The young doctor who recently joined our clinic told me, “In med-school they taught us the Zebra Principal. If you are walking in the woods and hear hoof beats, it probably isn’t a Zebra. That assumes, of course, that you’re not walking in the woods in Africa. It was a way of reminding us that, sure, some really exotic and rare condition might afflict a patient; but most often, the most likely explanation is generally the correct one.”

That very night, convinced that I had some rare cancer he hadn’t even considered, I went on eBay and bought a Zebra Xing sign. Just to rub his nose in it.

In a week it was agreed we needed a surgeon to remove it. Whatever it was.

“Oooooooooo! Your face will be even more sexy with a scar!” said my favorite deluded female friend. She’s the only one who finds me handsome. Even my wife doesn’t find me particularly handsome; or if she does, she never mentions it. My deluded friend wonders why I’m not beating off adoring female fans with a stick. I don’t have it in my heart to tell her that she’s the only one whose eye I appeal too. That’s why I keep her in my circle. Everyone needs a little ego boosting now and again.

“Take a look,” said the surgeon. In his blue-gloved fingers he held oval piece of skin a little larger than a pinto bean. Complete with salt-and-pepper stubble. Below that some fat. Then the enemy, and below that red-colored tissue. All told, more than a half an inch thick, looking like a diagram from an anatomy 101 text book. “Got it out completely intact,” said the surgeon, justly self-satisfied. “Now we can cut it open,” with a quick flick of the bloody scalpel he bisected the garden variety sebaceous cyst. Not a Zebra.

And the adventure was over. So uneventful as to be a non-event. And it was only 9:15 in the morning. So Debbie and I went to brunch.

Over a steaming fish-bowl sized cup of rich dark coffee deep inside the La Fonda, I regard my mate carefully. Debbie’s dark eyes are bright with an inner fire, “oh my God, you should have seen it! His hands were rock-steady. I’ve never seen anything like it, and his suturing…it was like watching a ballet!”

After a breakfast burrito, eaten carefully so I wouldn’t bite myself we headed out to see my PCP doc. I feel like I just came from the dentist. My face is numb and feels even bigger that it did before, but now I can reach up and stoke my hand across a reassuringly flat face. Whew!

My doc asked what the surgeon had given me for pain. Nothing.

She rolled her eyes, “Surgeons!” and reached for her Rx Pad. She prescribed Lortabs. I’ve got way too many patient’s hooked on these damn things. I swore to myself I wouldn’t even bother to fill the script. Forty five minutes later I was begging my wife to drive faster. Where’s that fucking Walgreens??

I missed an entire week of work, taking Lortabs and Advil. Some sort of pain killer every two hours. And I was not in pain. Nor could I function. I’d be a piss poor junkie. I think I’ll stick to being a drunk.

At least I can write drunk.

Holy smokes Wil! Glad to hear that it was nothing serious - but it still did not sound like a fun experience.

Ouch Ouch Ouch.
About five years ago I had one about 1/3 of the size you described.
It was scar tissue from a previous cyst, just below my cheek bone on the left side.
He numbed, sliced, diced and stitched. It sucked. I cried, a lot.
But once it was gone I was not in pain, nothing like yours.

So glad it is over and you are ok!!!
And sheesh, if you are writing drunk, I must do drunk writing because I don't drink and I "try" to write. ;-)

Rest up and get better!

And no picture of the offensive alien, or the scar that will make you look more masculine?