Low down dirty dog that I am, I have a new girl in my life. A fiery-tempered red head this time. And being male, officially at least, I couldn’t help but be distracted by her figure. She’s very thin. Groan. I confess. Beauty is only skin deep and, yeah, it’s what’s under the hood that counts, but sometimes you just can’t keep your mind on what matters and you totally fall for looks. And I guarantee that this girl will take any man’s breath away. Maybe a few women’s too.

In fact, since we’ve been hanging out together I’ve met dozens of new people, who just had to come over and meet us.

And how is my wife handling all of this, you ask?

She’s actually thrilled, because if I’m using my little red netbook, she can play Bejeweled 2 on the big library computer longer.

Well, not really. Not mine at all. Mine to flirt with, travel with, sleep with if I want too, but I can’t marry her. She belongs to the clinic.

After slashing our pay, eliminating our travel re-imbursement, and basically scaring the shit out of all of us…….the economic picture is now getting better. We’ve contracted billing to a professional outfit that knows how to squeeze the insurance companies and works for a modest cut of the action. We both win. Oh, and then a black man in a white hat rode into town. Well, he actually rode into Washington DC, but the effect was the same. All the 4,000+ community health centers in the United States got some stimulus money from the feds. First came a modest amount for salary and staff “restoration.”

Then came the capital funds. Larger money, for larger projects. The bulk of this will go to radiology at my clinic. We’ll finally have X-ray and ultra sound. Very cool. But there was a little bit of the pot left for all departments. I was told to make a wish list.

First on my list was an iPro; this is a Med-T device you’ve probably never heard about. It uses the same CGM sensors I wear, but it does not transmit. It stores. You can put one on someone and turn them loose for three days. They just wear the sea-shell. No monitor on the belt. No feedback to the patient. When they come back you download and you get three days of continuous data to mull over. Meanwhile, you slap it on the next patient in line. It’ll be awesome for filling in the fingerstick gaps.

It just came and the box is unopened on my desk. But not for long!

Next on my list was what I now know are called “Netbooks,” little baby laptops. Over the last year I’ve been more-and-more using computers to look at BGL patterns. I used to be able to (and probably still could, if I had too) look at a log book and visualize what the hell is going on with the patient’s blood sugar. But many patients don’t keep logs. Or they are less than… truthful… logs. Virtually all meters can be downloaded into software programs that vary from divine to awful. Anyway, all of them allow you to create some sort of graph laying time on one axis and BGL on the other and throw in almost any number of days you want.

It is an awesome way to look for trends and it makes adjusting meds a snap.

But then I discovered that showing the graphs to the patients and discussing the picture with them really helped my folks understand their diabetes in a whole new way.

Now we download almost every meter at almost every visit. And I rarely hear the old refrain of “I forgot my meter….”

My patients want to see their downloads (very few people here have computers, less than 5% of my patients).

Which brings me back to home visits. No way to down load a meter at a home visit. I’ve gotten so accustomed to Download & Review as part of a visit that not doing it is like leaving home without your cell phone. Yikes! I’m naked!

I dreamed of having a pocket sized computer to download meters at home visits….. 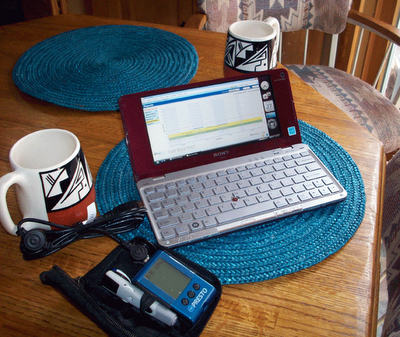 At a County Health Council meeting a few months ago, my “cousin” (my wife’s cousin’s ex-husband’s new wife) had an Acer. It had a foot print smaller than a sheet of typewriter paper, didn’t weigh too much, and was pretty thin. It set her back about three hundred and fifty bucks. Hmmmmmmmm…..

So I researched these new mini-laptops and choose a low-priced Leveno; the smallest one I found searching “notebook computers” on Google.

Third on my stimulus wish list was a Nonin pulse ox. Then some more anatomical models (you can never have too many), a set of laminated health condition charts with a stand, and finally a door stop. Yeah, money has been that tight.

I knew I wouldn’t get the whole list, but I was really hopping for the door stop.

I didn’t get the door stop. I still have to use a chair to hold our door open.

But I got the iPro and my boss liked the idea of a field computer. That was my medical boss. My administrative boss was thinking of giving me a cast-off from the nurses in the future when they upgraded. Sigh.

A month or two after I submitted my list I was told it looked good for my computer. I went on line to make sure there wasn’t anything new. That’s when I learned the word “netbook.” And that’s when I discovered the Vaio P. Smallest, thinnest, lightest.

A pound lighter than the competition. 65% smaller, in square inches. More than twice the dollars.

I revised my list and was called in to explain why I now needed a more expensive machine. Because it is pound lighter than the competition and 65% smaller…

I also reminded him of the several pounds of gear I carry at all times to make sure I personally stay alive, plus all the crap we have to take on a home visit. One pound is a big deal.

Because we are in the blood biz. The Vaio Ps actually come in gloss black, white, green, and red. Color has no effect on price. It might as well match my car.

I was told to order. I suspect my reward for being a loyal soldier during the money crisis. Nice to be loved.

So it also has GPS. And broadband. So now I can find a Starbucks anywhere. And surf the net while I sip a latte.

Actually, that sounds like a great idea. I’m off to Starbucks with my little red-headed girl…. Then maybe later I’ll make a home visit. 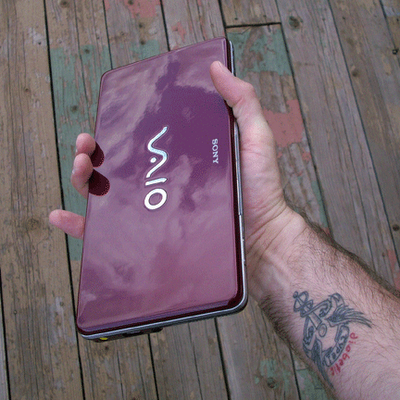 Wow - that looks spiffy! Oh! and the netbook is nice too! Hehe!

Seriously, I bet that will help you get more effective information to more people faster. Then it's up to us (the patients) to do something with that info.

Great that you got get items on your wishlist; what a nice surprise. The clients will see you coming with the red car and Vaio.