I’m trying to think of something nice to say.

My patient is studying his hands, not wanting to make eye contact. He squirms in the side chair. My desk is flat against the wall, as not to come between me and whoever I’m working with. I always sit sideways, facing my patient, wireless keyboard on my lap. I’m blessed that I learned to “touch type” when I was young. I can make chart notes while keeping eye contact.

Of course I’m not typing at the moment.

On the corner of my desk is a wooden Lazy Susan, which holds my computer monitor. Right now it’s angled so we can both see the download from his Presto meter. We’re viewing the graphic Average/Spread report, an X/Y graph that records two week’s worth of fingersticks overlaid by time and level of blood sugar, and the view isn’t pretty.

Well, Victorio, this is pretty bad…

The lowest morning fasting number is 323 mg/dL. The highest is simply off the chart, denoted by a little triangle at 600 mg/dL. On average, his day starts around 350 and drifts up into the mid 400s. He’s dying right in front of me, and doesn’t know it.

“Worse than the time when you said I was a train wreck?” asks Victorio.

I laugh. Did I really say that? Wow. That’s harsh.

Victorio is one of those guys who gets his shit together, gets his diabetes under control, then starts drinking—and I mean really drinking—and spins out of control again. It’s a repeating cycle you can count on better than the ground hog. But this is the worst I’ve ever seen his blood sugar in four years.

He gives me a lopsided grin.

I drum my fingertips on the edge of my desk, bad habit of mine when trying to jump-start my brain. Apparently I do it frequently enough that my patient’s know it means I’m thinking. Trying to come up with a solution. Victorio maintains a respectful silence.

How are you feeling? I ask.

OK. Are you peeing a lot?

How many times per night do you get up to pee?

“Well, to tell the truth, I’ve been feeling a little run down lately.”

My fingertips are drumming again.

I crane my head around to see the glowing blue-green readout. An 11.5, much lower than I would have expected, given his meter readings. I pick up a circular cardboard slide rule from the ADA, spinning the top layer around to line up the little arrows with the A1C level. The ADA also has an online calculator and a pocket electronic one, but frankly, I find the old-fashioned conversion wheel to be the fastest. Victorio’s estimated average glucose, or eAG, appears in the little window. 283 mg/dL.

eAG is simply a way of converting A1C scores into meter-speak, which we all understand better. It’s hard to internalize that 11.5% of the surface area of your red blood cells are coated in glucose molecules. Doesn’t sound so bad… But when you know that an A1C of 11.5% means that your night and day average blood sugar is 283, well now, that is something we call all grasp. We get that. I’ve used eAGs since they very first came out a number of years ago, and I think it’s one of the better things the ADA has ever done for us. Which isn’t saying much, I guess.

But like I said, I was expecting a higher A1C for Victorio, so as soon as I saw the 283 in the eAG calcualtor’s window, and I knew in a flash what had happened to him.

Abruptly I ask, Did I ever tell you about the prairie dogs? 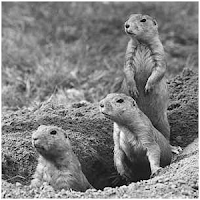 OK, so picture a nice sunny day. It’s warm, with just a hint of a breeze. And all the prairie dogs are sitting up on top of their little mounds, like they do, you know?

“Sure. They sit up on their hind feet and hold their front paws like this,” says Victorio, holding his hands up in front of his chest, fingers down, in a very good imitation of a prairie dog.

Yeah. Exactly. But all the sudden a bald eagle flies over, casting his shadow across the prairie dog town. What’s going to happen?

“The prairie dogs are going to dive for cover. They’ll go back down into their holes.”

Exactly. Now your beta cells in your pancreas, the ones that make insulin, are prairie dogs. And your blood sugar levels are the hungry eagle…

Victorio is suffering from glucose toxicity. When the blood sugar gets high enough, the beta cells freak out and shut down, like prairie dogs ducking for cover. It’s almost like a temporary Type-1 diabetes, and it can get out of control pretty quickly. Think about it. Super high blood sugar with insulin, and all the sudden insulin production shuts down. Glucose toxicity is about the only circumstance in which a Type-2 diabetic can go into a coma, although it still takes a heck of a lot longer to happen.

The treatment is pretty simple. We’ll put him on insulin and titrate it up promptly. He’s not a tall guy, but he has a heck of a beer belly, so he’ll increase his insulin by two units per day until his sugar starts heading to normal levels. I don’t know how long it will take the prairie dogs to get over their scare and come back out of their holes. Once his average blood sugar is below 200, the beta cells will start working again. Sometimes they’re back on the job in a week or two, sometimes it takes a month or more.

Once his body is producing insulin again we can probably pull the plug on the shots and return him to his oral meds. And he’ll do fine.

And then he’ll start drinking again, and the once and future train wreck will be back in my office, studying his hands, and not wanting to make eye contact.

I never knew that could happen.

It's a tough situation for everyone involved. Fought for you to watch, hard for him to try and figure out why he keeps repeating self-destructive behavior. Just all around tough.

I loved this post. I think it demonstrates all to well that both types of diabetes have distinct challenges, and that being human and having human tendencies (like falling back into bad habits) can put us all in dangerous situations. I also think the prairie dog analogy is genius.