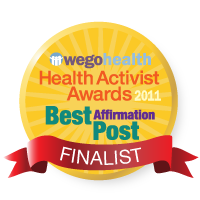 The sheet of paper was slipped under my door when I wasn’t looking. It looks like a ransom note from a cheesy movie, the message made up of letters of different sizes and fonts cut from newspapers and magazines, and pasted onto a sheet of yellow paper from a legal pad.

It reads: “Write a post for diabetes blog day. Or else. PS: I know where you live.”

Ah. It must be from Gina.

She’s doing this whole scrapbooking diabetes project for D-Blog Day, which is today. I told her I don’t scrapbook. Others must have said the same thing, because for those of us who are allergic to glue, or too drunk or too hypo to be trusted with scissors, we were given the following homework assignment: Write about why the DOC is important to you personally. And where should it go from here?

OK. That I can do. Because scrapbooking is going to totally get in my way of giving Mr. Hemingway a run for the money in the booze department.

So here we go. Now, in case anyone forgot, or never knew, I’m one of those adult diagnosed type 1s. And when I was diagnosed there weren’t any diabetes educators in my neck of the woods. And, as you know, type 1s are kinda rare. And my family freaked the fuck out and went into hiding.

And I was… Well, lonely.

Of course, I read everything I could get my hands on, but back then, the books and magazines we had available to us were not much help. They were written by doctors and edited by lawyers. Oh, sure, I learned about how my beta cells became a smorgasbord for my immune system. I learned now I might go blind, if my kidneys didn’t fail first, assuming the hypoglycemia didn’t carry me away in my sleep.

And I learned how to smoothly blend my NPH by spinning the stainless steel pen between my palms. And I learned I had been testing at all the wrong times.

But nowhere could I find what I really needed. The human stuff. The companionship. The understanding. The support. Not even the little stuff like what the fuck to do with the blood left on your finger after you test.

Then one day I found Gina on the internet at a funky little place called Diabetes Talk Fest. I think I was like, I dunno, the fifth member. Maybe the seventh. I’m bad with numbers, that was years ago, and I can’t even remember last Tuesday. But it was super small back then and it was also super wonderful. There were others of my kind out there! We could ask questions of each other. We could share, we could vent, we could laugh, and we could cry.

I had found a home.

Which back then, was really fucking weird. It was my first exposure to a virtual community, long before our society became Facebooked and Twitterfied. Hell, back then most people didn’t even use their real names out on the internet frontier. I went by “Printcrafter,” as I was working as a printer for a high-end custom B&W photo lab.

Anyway, eventually, one thing lead to another and I ended up becoming one of the early diabetes bloggers; which meant that I knew the 12 other early diabetes bloggers, and we all read each other’s stuff. Sometimes I actually miss those simpler days. It was such a joy to read Scott and Six and Allison and Amy and all the rest. It was like having coffee with a best friend. Now, I barely have time for coffee at all, much less time for coffee with my friends.

And what friends they were, and still are! It was amazing to me that I could feel so close to people who never stood in the same room with me. But we knew so much about each other, our loves and hates, our fears and hopes, our joys and sorrows. We became a family united by our diabetes and I think we all thrived for it.

Eventually, most of us would meet in person, which was wonderful beyond describing, but my life-long friendships with this gang were born on “1s” and “0s” flying across copper phone lines and resolving as words on a flickering computer monitor in the dark of the night, when the humans that live under my roof had long since retired.

Of course, in time, this small group of friends, this small family, would grow. And then grow up, and become the Diabetes Online Community. And as the world changed so did we. We are still family. But we’re also strong in a new way. I see now that we’re a force to be reckoned with. Industry listens to us, respects us, and fears us. And that’s good. Next we must get the government to listen to us, respect us, and fear us. Because we speak for all our kind. We are the ambassadors.

But we must be more.

We must be the tip of the sword. Because if we don’t, who will?

Thank you for being one of the early "voices" I found and was inspired by!

ditto to Rachel said. You were one of the first blogs I read and still read!

And now I am happy to be able to call you my friend too.

This is great, Wil! Thanks so much for this. I just muttered out loud that this has to be the best post I've read today and it not only hit my heart, but it eggs me on and brings a challenge for how the community can evolve even more. Thanks for what you do, and for being one of those who got this all going from the ground level, my friend.

Thank you for being such a wonderful, honest and knowledgable part of the DOC. I always laugh when i read your blog and I always learn something! Thanks Wil.

I really appreciate this post. Very nicely done. Damn! You're a great writer.

Ah Wil. You are awesome. I'm so glad that you felt so comfortable with the rest of us weirdo's and added your voice into the mix.

It is a valuable addition my friend! So glad to know you.