Why Val Kilmer bought me a turkey

A couple of months ago at a restaurant Chuck Norris was at the next table over. No one cared. No one bothered him. My service didn’t suffer because he was there. I would not have even noticed. My mate is the one who recognized him, not that she really cared either. Last year Robert Redford was at the opera in Santa Fe the same night we were. Ironically, we had better seats. He was behind us.

So celebs are around and amongst us all the time in New Mexico. The West being the West, it really just doesn’t occupy much of our gray matter. So I was vaguely aware that actor Val Kilmer had a ranch somewhere in the vicinity of my clinic. Maybe it is north, maybe east. I dunno. Maybe it’s 10 miles away, maybe 100 (we look at space and mileage a little differently out here as we have so much of each). So I honestly have no idea where Kilmer’s place is. I don’t really care. To be honest, Val Kilmer never really entered my mind at all.

Until he bought me a turkey.

So here’s how it went down. On the Monday before Thanksgiving I was actually busy. This came as a surprise to me, because I had predicted that I’d have a 100% no-show rate from November 24 through the end of the year. After all, who wants to see their diabetes educator just before Thanksgiving. Or during the Carb-mass season?

My assistant, J, slipped into my office between patients. “You’re never going to believe this,” she told me.

I stopped frantically typing my progress note into the computer and looked at her over the top of my glasses. Hmmmmmmmmmmmmmmmm?

“Val Kilmer is buying you a turkey.”

I beg your pardon?

“Yeah, the head guy from his ranch just came in to see me. He asked if we would distribute some Thanksgiving baskets to the poor.”


“They said Mr. Kilmer had heard we had a diabetes educator here who had done a lot for the community and that he wanted one of the baskets to go to him as a thank you.”

OK then. Be sure to get me an address so I can send a thank you card. I was already feeling oddly guilty, as there are so many with greater need that I, but I also believe that when someone gives you a gift the best policy is to accept with grace.

By the way, how many baskets is he giving?

I think I actually snorted.

“To us,” added J quickly, “he also giving to the church and some other community organizations.”

Ah, well, that’s another story then.

So J put on her thinking cap and chose the seven poorest people in the community and called them. 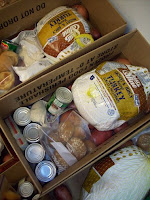 The next day, at 3pm the baskets arrived. Not eight, but 20. And what baskets they were! A large turkey. Stuffing mix. Turkey gravy mix. Three fresh onions. A dozen or more fresh potatoes. Can of peas, green beans, and corn. Cranberry sauce. Freshly baked rolls. Two sticks of organic butter. A pie larger than a pizza. Even an aluminum roasting pan with a happy T-Day note from Mr. Kilmer. If you didn’t have a pinto bean in your house you could have still put on a feast for the whole family. Nice.

It was three hours until closing when all the baskets were unloaded into the diabetes ed offices. J started calling the next twelve poorest people in the county. Again, I was oddly busy, but as families arrived I could hear, again and again, “Val Kilmer? Really?”

Mr. K brought a lot of happiness to the people who needed it most. And me too. 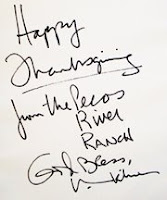 That is pretty damn cool!

Thanks so much for sharing. Mr. Kilmer gets such crappy press. This story is just a tiny part of Mr. Kilmer's generous heart and I am glad that the public can see a story about what a kind and decent man he is. Peace

Here's the message I've been sending around in response to this story. Val is a wonderful person and I, like so many, am fortunate enough to have been blessed with his friendship. I'm so sick and tired of the way the media treats Val, and I do all I can to help make up for that by passing on heartwarming messages like this one.

****Here's a wonderful and positive story about our Fearless Leader Val Kilmer, and this loyal Christmas Elf is sworn to serve and protect our kahuna, as well as pass on all the heartwarming and positive news about the V-Man.

Please read and pass this on.

Once again a fine example of Val Kilmer's generosity which never makes it to the mainstream media. He's constantly based by the media but does much to help others, such as the annual fundraiser for the Wildlife Center in Espanola, NM.

How nice of him.

Now, whenever I see Val Kilmer I'll think of turkeys and shirtless vollyball. (One of my all-time favorite movie scenes ever.)