Wow. This thing is light. When I first held the Asante Snap in my hands, I thought they had handed me a mockup, like one of those hallow plastic husks they put under glass at diabetes trade shows, not an actual unit. But this was the real deal, and as insulin pumps go, it’s  feather light. Fully loaded with a week’s supply of insulin, it tips my Slater kitchen scale at a hair under three ounces, fully 25% lighter than the Tandem t:slim.

In your pocket, weight-wise, it feels like you forgot your pump. But it’s thicker than the highly-pocketable t:slim, and longer to boot. Your diabetes educator might ask you, “Is there a Snap in your pocket, or are you just happy to see me?”

In shape, thickness, and build quality, the Snap is reminiscent of a TV remote—which doesn’t sound very impressive—because it isn’t. While light weight is good, I confess that this thing feels cheap-ass in the hands. But you have to remember that I’ve been pumping the Appleque t:Slim for over six months, so that’s warped my expectations. The t:Slim is handsomely made, solid, sexy, and sports a bright color-touch screen. If I had picked up the Snap with a Med-T Revel on my belt, would I react differently?

I think maybe so.

The Snap’s screen is a blue-backlit LDC… which seems rather 90s to me. But for such a small screen, the Snap is… well, a snap to read. All the letters and numbers are big, and the resolution is sharp, even high-res compared to, say, the Med-T pump’s rather cubic pixilated screens. So while the Snap screen falls far short of modern sexy, it’s highly serviceable. A few years ago, it would have blown the doors off of everyone.

But it’s not a few years ago.

That said, I don’t find that that backlight blinds me at night, and outside in direct mile-high New Mexico sunlight it can be read just as clearly as it can be anywhere else. You can’t say that about the t:Slim, which requires you to cup it in your hands for shade if you’re using it out of doors. Bottom line, the Snap is as easy to read as a Kindle.

Ergonomically, although it shouldn’t matter, I think it’s a right-handed pump and I’m a lefty. Every time I pull the damn thing out of my pocket, I’ve got it upside down. Oh… wait a sec… I just figured out why I do that. The tubing exits the t:Slim on the right-hand side, while it exits the Snap on the left-hand side. I’ve just gotten into the habit of flipping the pump a certain way based on where the tubing is. I need to re-train my hands. Never mind.

Anyway, when you hold the Snap, it feels a bit like a game controller (but I doubt that Diabetes: The Video Game will become a best seller). If you hold the Snap in two hands, your thumbs fall comfortably onto the buttons on either side of the screen, and can easily reach the three buttons across the bottom. 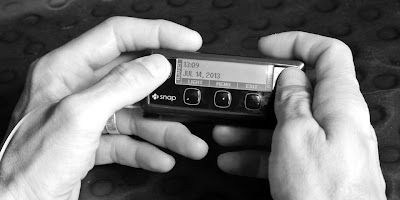 I find I’m all thumbs using this thing, but in a good way. Operating it is as easy as texting with a pre-smart cell phone. We’ll talk more about this some other day, but I’ve found that there are a number of operations—taking a correction bolus for instance—that are easily done one-handed, but on the other hand(s), there are some common functions that take waaaaaaaay too many button presses. Again, a discussion worthy of its own post, so stay tuned.

The buttons themselves are sweet. They take a little authority to press, reducing the risk of a butt bolus (there’s an optional screen lock, but that adds extra steps between me and my insulin so I’m not using it), but the buttons aren’t overly difficult to engage either. All things being equal, I’d describe them as delightfully springy. Sounds more like the description of a new laundry soap than in an insulin pump, huh? Now available in Delightfully Springy and Country Rain scents…

For now, I’m carrying the pump in my pocket, as I already have the frickin’ CGM and a meter case on my belt, and enough is enough. But the pump did come with two belt cases. One is a handsomely made leather job, with a rotating belt clip for vertical or horizontal wear, complete with the Asante logo deeply embossed into the front. It has a magnetic closure and no window. That means it’s a slip-out belt case; you cannot operate the pump in this case. With the pump in the case it’s nearly identical in size to the Dexcom G4 in its own case, but nearly twice as thick. I can’t see myself using it, even if nothing else were on my belt. Plus, it doesn’t come in tan. (I’m going to keep harping on this until one of these diabetes device companies gets me a case that matches my frickin’ wardrobe!)

The second Asante-supplied case is a high-tech-looking gripper clip that holds the pump close to the body and lets you operate the pump from your waist. I could see myself using this one, and might test it out before we are through. Actually, I kinda wish Dex would make one like this. Again, the clip rotates and I suppose it could be used either as a belt clip or a dress pants pocket clip (to keep the pump from dropping to the bottom of those sometimes overly-deep pockets). Like the pump, however, this clip-case looks a hair flimsy. Well, that’s not quite fair. The clip itself is military grade, no doubt about that, but the arms that hold the pump to the clip look like they might snap off in a light breeze. I’ll have to test it out in a light breeze, then I’ll report back. 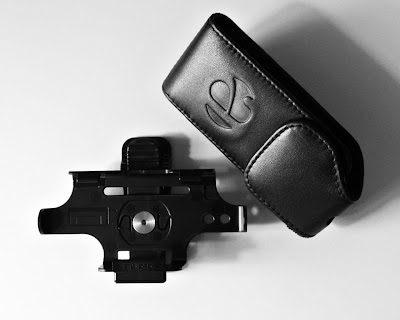 So those were my first impressions, many of them aesthetic, and you need to remember that I’ve been carrying the ultimate aesthetic pump in my pocket for half a year now. And while good aesthetics are nice, they really aren’t the name of the game here. I don’t want an ugly pump (and the Snap isn’t), but performance and ease of use are the real deal makers and deal killers. Or should be. Yeah, I know of a couple of kids who chose the Ping just because of how it looked. But if we want the BEST pump we should really be looking at performance, ease of use, and user interface.

When it comes to pure looks, t:Slim has everyone beat. But as pretty as she is, she can be a huge pain in the ass to use. She’s loaded down with safety and warning screens to the point that many daily operations are slow, slow, slow.

How does Snap compare in this regard?

Tomorrow: The fastest gun in the west

OK, while I am reading the whole post, I couldn't read on after the part about "Diabetes: The Video Game"... Now, I can't get out of my head images of a video game where we get to follow Uncle Wil around his D-world. :)

Promise to read the whole thing and comment later.