Enemy in the dark 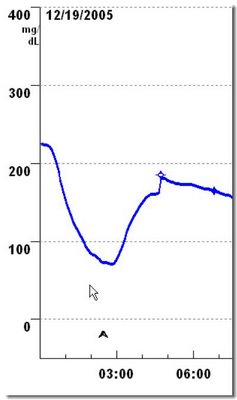 This is the “trace” of an actual hypo. The shadow of a silent killer on the wall. The signature of the devil himself.

While I slept soundly the attack was launched. The blood sugar drops, drops, drops, drops and had the Guardian not raised the alarm: Arise! Awake! Enemy at the gates! Who knows how much further it would have dropped, or if I would still be with us to write this post.

We’ll never know of course. But at 52 mg/dl with over an full unit of insulin in play in a body hyper-sensitive to insulin.....well to paraphrase my good friend Six / Kerri: it would have been an officially scary situation. Without the alarm would my life would have been at risk? Did the Sugar Reaper come knocking last night?

With these thoughts rattling around in my head I did some web surfing this morning as the film processors came up to temperature. Found some scary stuff online. According to “Evaluation of Death from Hypoglycemia” from the Department of Pathology at USC Medical Center: “...glucose of 40 mg/dl or less may lead to death from hypoglycemic coma.”

I have been lower than 40 in my life, but not for long. Striking like a thief in the night, if I had slipped into a coma it would have been at least seven hours before any one was up and about and in a mood to rouse me. According to an article on hypo by Ben Eastman at the Diabetes Health Magazine web site (by the way, if you don’t subscribe to this journal go now to their site and get a free copy): “Some research estimates that between four and 13 percent of the deaths of people with Type I diabetes are the result of hypoglycemic events.” Why the big range in the estimates? Apparently your blood sugar can continue to change for some time after you’ve kicked the bucket, making it hard to definitively label it as a cause of death. Night-time hypo deaths even have the quaint title of “Dead in Bed Syndrome,” so called because victims are found dead the next morning with no sign of distress the previous night.

We all know that the results of the DCCT found that intensive insulin treatment substantially reduces the risk and number of long term complications. But, quoting Eastman now, “What is less commonly known is that the same tight BG control that reduces the risk of complications has a darker side. The intensive insulin therapy described by the DCCT presents a three fold risk of severe hypoglycemia--sometimes with dire consequences.”

Wow. You can read the complete article at Dibetes Health. It’s really good.

Back to the mug shot of the enemy, my sharp eyed readers will notice I left a mouse pointer on the screen shot. Nope, not being careless and last night’s adventure did not eat half my brain cells. The tip of the point marks where my BG meter clocked me at that point in time. I also forgot to enter the first sugar dose. There should be another little triangle to the left of the one that shows on the screen shot. You’ll notice that the hypo’s drop is nearly a perfect straight line, and then there is a tiny little jerk to the right and then a gentle tapering out of the rate of decent. That was the first sugar dose kicking in. My take? Looking at that line plunge downward so aggressively with no sign of let up....I think without the Guardian’s alarm it would have been officially bad news for Wil.

I’m sure some of you are wondering why I’m not furious that I hit mid-fifties before the girl raised the alarm. Well, as far as I’m concerned the system worked. She woke me up in time to confirm the situation and take action. What more could I want?

Looking at the plummeting trace it’s pretty clear to me it is on its way down to meet the arrow. Looks to me like the BG is dropping at about 1.25 mg/dl per minute. There is an inherent five minute lag in the sensor readings. So by the time I take the BG reading the Guardian most likely sees me at 67; still about 20% high. Why? Who knows? Who cares?

Well, that’s two lies. I do care, and I do know...sort of. Here’s my analogy. There two groups of tourists getting into a pair of elevators at the top of the Empire State Building--a group of Germans and a group from Japan. I’ve actually never been to the Empire State Building, so I don’t know if it has two elevators; I would imagine it has many more. I digress again...

The two groups start filing in to their elevators at the same time. The door on the German’s elevator closes a second earlier, and one of the German tourists promptly presses the button for the first floor. In the elevator full of Japanese, the tourist closest to the button is just a tab slower in pressing the down button.

Maybe the elevator with the German tourists has a newer motor and moves a fraction faster. Maybe the Germans as a group weight more than the Japanese, pulling the elevator down to earth just a few fractions of a second faster.

All these tiny factors add up. A door closes earlier. A button is pressed faster. A more efficient motor. More weight on board. By the time the Germans reach the first floor they are a full minute ahead of the Japanese.

Blood and interstitial fluid are on the same journey from the top of the building to the bottom; but they are not in the same elevator. Remember that the Guardian system doesn’t really measure blood glucose. It measures glucose in interstitial fluid. The two glucose values are closely correlated, but they are not the same. They travel the same journey, but not always exactly at the same time.

I could, and may, increase my alarm threshold to 80, or even 85 at night. That would allow me to intercept lows earlier. I haven’t decided yet.

But like the searchlights on the walls of a fortress, my Guardian angel spotted, revealed, and exposed the raiders lurking beyond the walls. She raised the alarm. She did her duty by me, and tonight I’ll sleep better knowing she’s on the lookout for the enemy in the dark.

Dead-in-Bed Syndrome is one of the most frightening possibilities of this disease...

I am damn glad the Guardian was watching over you last night!

And as usual, a wonderfully-written analysis of your experience.

I may be offline quite a bit over the next couple of weeks, so if I'm not checking in, it's not for lack of interest :)

Take care, and have a wonderful, worry-free holiday.

I've been reading your blog since you started and I just want to say thanks for writing it. I am jealous and cannot wait to get my hands on our very own Guardian!! I'll have to be patient, my son is 4 so it will be a bit before it's approved for kids. I am hoping it will be an early Christmas present next year. For now, we will keep checking every few hours at night. Some day, my husband, son and I will sleep a whole entire night.

I am glad 'she' is working out so well for you. I would change your threshold alarm to 80 at night, just to be safe. Why not use this remarkable technology to the best of your advantage?

Keep blogging, reading your blog really lifts my moods when my son is having a tough day or week with bg's. There is hope, with the Guardian:)

Thanks again and happy holidays!
Deb

No offence, but you really need to loosen up your bloodsugar control. It seems like every day you're writing about a new night-time hypoglycemia problem. Maybe you should talk to your doctor about this and see if you should be taking a little less insulin at night. Your overall sugars may run a bit higher after that, but it sounds like these night-time lows are of more immediate concern.

Sandra--Thanks for checking in and for the kinda words. I know from your blog your on your way to Massachusetts in the red CRV. Have a great trip and visit!

Deb--Thanks for commenting! Yikes, it just broke my heart to hear of your three years of no sleep for your family. Here's hoping the Easter Bunny brings a Guardian so that you don't have to wait until next Christmas. As to threshold I'm hoping to find a balance between being sure we get the alarms we need while not being woken up too many times with false alarms. Well, they aren't really false, but if you set to 80, hit 80 and get an alarm you don't need to be taking on any sugar.

Stranger--no offense taken, you may well be right. One of the reasons for getting the Guardian is that my BG control evaporated at the end of the summer. Once the inital operational learning curve is behind me, and once we have enough data from the Guardian, the plan is to begin making thearpy adjustments. It is important to do this from average data, not individual days. I'll keep everyone in the loop as this develops!

wil,
i am so happy you have the guardian....i dont want anything to happen to you in the middle of the night

and since you never been to the empire state building you should come on over and visit me in the big apple i will take you there...cause i have lived in NY all my life basically work down the block and never been there myself lol

Like Deb (Hi Deb!), I'm anxious for this to get approved for kids, too. My daughter is 11 and has had diabetes for almost 8-1/2 years. Dead In Bed scares the bejesus out of me and also has me out of bed a couple of times a night, making sure she's ok.

Thanks for writing this blog. It's a fascinating thing to read and I'm really learning a lot about the Guardian.