I am used to looking at BG graphs from meter software. Clean, straight, orderly lines that connect the dots. Somewhere, deep down, we all know this is not how it really is. Nature is messy. 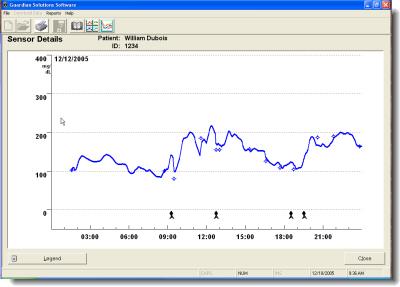 So I've been staring at the elegant, twisting, morphing, snake that is the plot of my blood sugar. It is so damn....un-linear. It is elemental. Raw. Wild. Biological. It is chaos, full of bizarre peaks and valleys. An alien landscape, sometimes like a river viewed from space, sometimes the jagged mountains of the moon themselves.

Why does it drift up and down throughout the night like a Chinese kite on a light summer breeze? Why over here does it look like the plot of an earth quake? I knew this would happen, but I'm having a hard time wrapping my overly technical brain around it.

Then, on the same graph, I'm staring at the little blue stars that show finger sticks. On the graph things don't look as bad as they have sometimes felt in my heart. True, the dots don't always fall on the line, but they do tend to follow the flow as it snakes it's way through the day. When the line goes up, the finger sticks are in the area. Sometimes higher, sometimes lower. When the line goes down the finger stick dots chase it. Some times in the lead, sometimes following. So bottom line: how well is this thing working for me? I'm so confused I do the only thing I can think to do.

"Babe, would you look at these charts with me?" It's good to have a wife. We cuddle up in front of the lap top. The "wall paper" is a picture of Rio and I taken on top of the butte in our front yard. The little boy and the fat man. How much has changed in a year. I've lost 60 pounds and he's gained most of it. 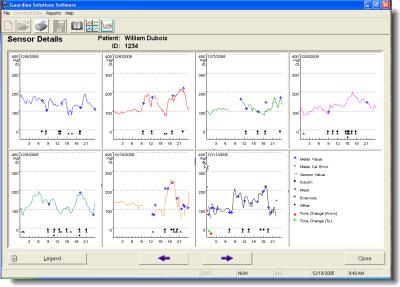 We call up the Solutions software. We look at the Sensor Details section. 21 mini-charts displayed seven per page. Each shows the snaking river of BG data, up and down, over 24 hours. We can click on each one to make it larger, to look and see where the blue stars lay. Some times north of the river, sometimes south. Some times dead in the center. There are several absolutely perfect days. But as we look through them I see that even with the first six sensors there were times the finger sticks were a little higher and times when they were a little lower.

Somehow, I'd gotten it in my head that the first sensors ALWAYS eared low when they were off. Not true. They were always very good, but some were on the high side throughout the day, and some were on the low side throughout the day. After number 7 crapped out I got it in my head that number 8 was always running high. Again, not true. In fact, the performance was very comparable to the first six. I had just become hyper-sensitive to it's performance because of the bad experience.

I take a look at the graph of the morning that prompted my angry call to Medtronic when Cozmo showed 65 and the girl was lollygagging around at 90. That slice of time was accurate, but not the whole story. The sugar was in free-fall, the snake was chasing the star down, down, down. Had I not woken up to test I'm betting the girl would have alarmed on her next check. Even when we look back at the "bad sensor," it is not as bad as we thought it was at the time. Oh, yeah, it IS bad, don't get me wrong, but it was trying. The blue stars are debris tossed upon an angry sea. Far off of where they should have been, but you can see the system was trying to link up, to create a unity.

Tonight: the call from Medtronic.

I'm sorry that my screen shot of the second graph came out so badly. I guess the lines are just to small to reduce it that much.

In the real world the seven little charts look great!

Great to hear that your girl is (generally) on the right track! The screenshots you provided were a bit too grainy in order to read (maybe you can save the images with a higher resolutions next time?)
Keep up the great posts:)

Yeah, I know the screen shots need a lot of work. I started them out higher res, but I couldn't get them to upload to Blogger.

I'm not sure if that's them or my pokey internet connection.

At least it gives you some idea of a visual beyond the images I can craft with words.

I'll play around with the screen shots some more this weekend. If I have better luck I'll edit and repost.

Yours do look really awesome...I can read just about everything...

Glad to read that the girl is a bit more in tune than you thought.

Must admit that I had to take a step back from your blog for a couple of posts--reading of the potential problems with the Guardian was just too damn much, given some other things we've been dealing with over here.

But you know, I couldn't stay away for long. The writing is just too good; the information just too darn invaluable...

And, given what you've had to deal with over the past several days, I figure you could use as much OC support as you could get.

Hi Sandra, I was wondering what happened you. I'm am sorry to have added to your stress. This has been, and continues to be a very bumpy ride. I have no idea at this point where the story is going or how it will end: happily ever after or in bitter disapointment. Some times I think one, sometimes the other. I feel like a human yo-yo. Joy. Stess. Confusion. Depression. Joy. Stess....If the diabetes doesn't get me the nervous break down will! ;-)