Here's looking at you, kids 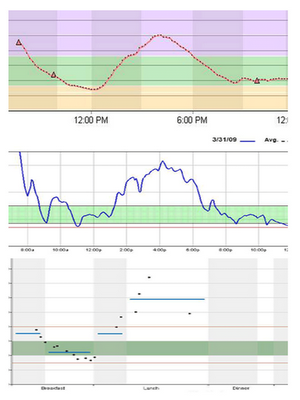 So I went into Photoshop and rescaled downloads from CoPilot, CareLink, and ZeroClick. I distorted them so the X and Y axises would be close to the same and then lined them up by time as well. The upshot, as we are comparing apples, oranges, and lemons--I wanted to try to get all the fruit on the same page. It was a huge pain in the ass, so we won’t be doing this little exercise again anytime soon.

Top is Navigator from day one, about 12 hours worth. Middle is Guardian from the same time period. Bottom is Presto. That’s my clinic presto meter, so it doesn’t have the late afternoon or early evening readings.

So a couple of things to point out. First, Guardian is exhibiting a very noisy trace. This happens sometimes, but is pretty rare. This particular sensor on this particular day was really acting crappy. As speculated yesterday, I could be RF interference from the other CGM. Navigator’s trace is much smoother. Of course, they might polish the data during the download, but it seems to me that both traces are accurate presentations of what I experienced with the devices on that day.

But in spite, or despite this, but the CGM curves are pretty much the same shape. We have a drop from early morning to noonish, a hospice-pizza spike, a decent to base line that is pretty rapid and then a leveling off.

The connect-the-dots Presto control strip also mimics the overall shape of the curve too.

So bottom line. Both systems, from a large over-all trend perspective work.

But which is better in the trenches for day-to-day use and survival? Ah, it is too early to tell. The real-time shootout has just begun.

Next time: a summary of first impressions using Navigator.

Thanks so much for posting about your experiences in such detail. Couldn't be more timely for me...considering the MM offer right now as an opp to get a "free" CGM. I'm eagerly await the next installment of your CGM exploits!

Don't have the option for a CGM at all, no insurance (a good thing?) so Way to expensive for my small bank account.

Thanks for the details, Love the graphs.