Back in the day, about 1980 or so, cameras were silver. Wonderful, heavy, metal objects that combined art and function. Then came black cameras. Still metal, still heavy, but matte black. Before long no self-respecting professional photographer would be caught dead using a silver camera. That was for amateurs. 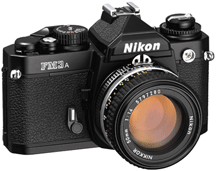 Of course, within a decade, all cameras were black. Then plastic made its way into cameras in a big way. Soon cameras were light-weight plasticy devices. Machined precision gave way to computerized controls. Dials gave way to buttons, then buttons gave way to menus.

And then, of course, film itself all but disappeared.

But just before film went on the endangered species list, a wave of retro cameras hit the market. Back to chrome and leather. Yum. A song to the eyes, the fingertips, the heart.

But, you know, it’s hard to beat basic black. It’s serious. Elegantly functional. And it matches everything.

One of my T-1 patients, Rick, was in my office yesterday. We downloaded his Med-T pump and CGM. I spun my large square computer screen towards him (it’s mounted on a Lazy Susan for that purpose) and we started chatting about his numbers. Then his CGM squawked at him and he had to check his blood sugar.

He whipped out a dark metallic purple OneTouch UltraMini. This was a new color for me. I had seen silver, green, red, and black. But never the purple. A quick Google also shows metallic blue has joined the family.

Of course, not being an interior designer, I was mistaken on the colors. Green is actually “Limelight®,” and red is actually “Pink Glow™,” and silver isn’t silver, its “Silver Moon™,” black can’t be basic black (although clearly I’d better run out and ™ or ® “Basic Black” right away), for Minis it is “Jet Black™,” the new purple my patient is carrying turns out to be “Purple Twilight®,” and the new blue is, of course, “Blue Comet®.”

I feel like I’m at the paint department at Home Depot, planning a home makeover, rather than talking about diabetes. Don’t get me wrong. I’m thrilled that the consumer electronic craze of wild colors has made it to medical devices. Like computers came in Blah-Beige® for a decade or two, early meters seem to have gotten stuck in white until the FreeStyle Flash, then they were all silver for the next five years. Now we’re really getting some choice.


In addition to his purple mini he had a black lancing device I’d never seen before, and I fell in love with his “Basic Black®©™∑∞☻” colored lancing device the second I saw it. It reminded me of my first black Nikon camera. Actually, at first glance, I thought his lancing device was the new “Delica” that OneTouch (a.k.a. LifeScan, Inc., a Johnson & Johnson Company) has been pushing at trade shows recently. But no, it was the older one-handed nine-depth, short, slim, and sexy lancing device that I’ve been using since it was introduced. In my opinion, the best lancing device ever made. So far.

But now it was dressed for the opera.

I guess I started to drool, because Rick insisted I keep it. I frantically dug though my box of lancing devices to find him a fair trade: a traditional off-white and blue. Same model, but more dressed for a tennis match. Rick insisted he didn’t care about color (but I bet you’d have to pry his new Purple Twilight® UltraMini from his cold dead hands).

Yeah, sometimes it is the little things in life that make you happy.

As soon as I got home I velco’d my new Basic Black OneTouch lancing device on to my “Chrome Blood®©™” Presto meter.

I'm glad you got the lancing device you wanted after your kindness in getting me the one I wanted. Hope you remembered to take out his lancet before poking your finger.
And I agree that black goes better with red than white and blue does.

Yeah, it would really suck to get stabbed with someone else's lance and catch diabetes! ;-)

Acutally, he took the needle out himself and put it in the sharps container in my office (clinic policy #1--never touch anyone else's sharps).