I won a writing award for my CGM compendium, Beyond Fingersticks, the other day: the Ames Eyetone Trophy.

Now, I’ll forgive you for being unfamiliar with the Eyetone trophy, as it is not nearly as well known as the Pulitzer, Hoffer, or even the National Book awards. I’ll even forgive you if “Ames Eyetone” doesn’t ring a bell in your brain, either.

I’d heard about the Eyetone, of course. I knew a little about it, but not much. I don’t think I ever even saw a picture of one. Until I won the Trophy.

The Ames Eyetone was the great-great-granddaddy of every blood glucose meter on the planet. It came on the market when all of our kind were still peeing on strips to see where our blood sugar was hours ago.

I Googled around to try and learn more about this pre-internet technological marvel, but there is an appalling lack of information out there about it. What I did learn is that it came out in 1978 and was the first device available to consumers for testing their own blood sugar. It tipped the scales at nearly four pounds, and had to plug into a wall outlet. It was fast. Why it gave you results in a minute!

Life was slower back then. 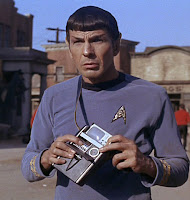 Except for that whole plugging into a wall thing, it is about the size and shape and look of Mr. Spock’s tricorder device in the original Star Trek TV show.
Who knew Spock was diabetic?
Back in the day, the Ames Eyetone would set you back $400. Of course, what’s really appalling, is that it would have set you back $1,390 in today’s money. Something to think about the next time you are whining about the cost of CGM systems.

It read the existing-for-a-decade Dextostix strip. The Dextostix was a strip that you put a drop of blood on, engaged in a ritual using a squirt bottle of water, a stopwatch, and a color chart. Dextostix strips apparently worked great, but the variation in color was so subtle that most users could only tell if they were high or low. The Eyetone read reflected light off of the Dextostix strip to give you a more accurate blood sugar reading.

My favorite part of the device is the readout. We are so used digital readouts where a machine gives us a number. The Ames Eyetone has a needle: 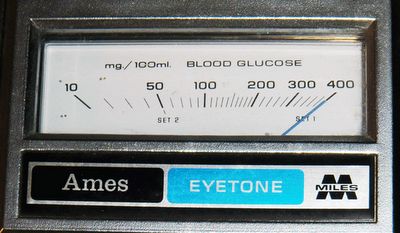 Actually, according to diabetes guru David Mendosa, the Eyetone was the second-generation of the Ames blood-sugar meter. Ames had been making the more pricy reflectance meter, the A.R. M. of Dr. Bernstein fame, for hospitals and doctor’s offices for a few years before that. You can read David’s fascinating history of meters here: http://www.mendosa.com/history.htm

But back to the Trophy. Beyond Fingersticks had only been out about two weeks when I received an email with the deceptively simple subject line: Trophy.

My first thought was that I was getting spam from some company that makes trophies and award plaques. I almost didn’t open it, as that whole thing with the hot Russian babes that were dying to meet me didn’t work out so well.

Instinct saved me. I opened the email and read:

“I just finished your CGM book and am reading it again. I’m impressed. You certainly deserve some kind of award for writing this book. It could only have been written by a seasoned and very honest diabetic, a world-class teacher, an experienced clinician, and a storyteller.
So what could be an appropriate gift, a trophy of sorts? Well, I have just the thing.
I'm sending you something with some serious sentimental value that I hope you can use in your office as a conversation piece: my 1979 Ames Eyetone Reflectance Meter. I was diagnosed in Dec 1979 and along with teaching me how to do urine tests and showing me how to inject 20 u of NPH every morning and hope for the best...the folks at Children's Hospital in Pittsburgh also recommend I try this other thing, this brand new thing that people had just started using to test their own blood at home, this big black box that could kind of...supplement your urine-test chart, said the nurses.
I've been hanging on to this little piece of diabetes history all these years thinking I'd sell it to the Joslin Clinic for a pretty penny for their museum after there was a cure. But since that hasn't happened, I want to send it to a fellow PWD that is seeing patients, teaching, writing and telling stories. (I surely wish I had known someone like you to give me a hand back in 1979.) Enjoy it for a while, then sell it to a museum if the time comes.”


The email was from “Laura,” one of my diabetic sisters. (That’s what I get for looking at the subject line instead of just looking to see who the email is from). We’ve corresponded on and off over the years. She’s an “undercover” T-1, as her job could be threatened if her employer knew of her condition. She’s not breaking any laws, it’s not like she’s flying an airliner for a living, she’s just being prudent and realistic about the prejudices where she is.

So yeah, the Ames Eyetone Trophy isn’t a “real” contest. I had no competition, no panel of judges. But it was awarded from the heart, by one of my own kind, and that makes it, by far, it is the greatest honor I’ve ever won.

And while I’m the first diabetes writer to ever win it the Ames Eyetone Trophy, I won’t be the last. I’m never selling it. But when I’m old and grayer and willing to part with it, I’ll award it to some other deserving writer.

Maybe to the guy or gal who writes the history of the cure. 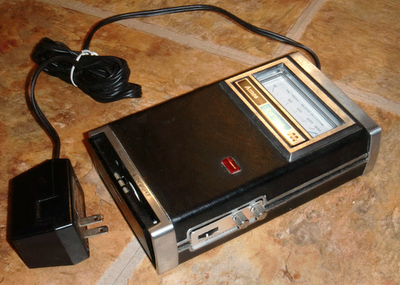 Wil, I think that is freaking awesome! And so much better than some regular old trophy.

I dig it, you deserve it big time!

A well deserved trophy!
Does it still work?
That's quite a meter. I'm sure it will be a great conversation piece at the clinic.

Congratulations on your award.
Very neat history. I didn't know it had a needle.

This is just awesome and so heartfelt. You have a piece of diabetic history. It's always good to know where we have been and see how far we have come. Congrats!

Excellent and definitely a piece of history. Do they make those dextrostix anymore?

My first meter was also plugged into the wall, but it wasn't as elegant as the Ames Eyetone. It looked like it was built from a Radio Shack kit, with BIG red seven segment displays to give me the results. Ah the good old days.

BTW, I started reading your new book last week, it's informative, funny and an easy read. Everything I've come to expect from your books.

I had an eyetone machine when I was a "new" diabetic, used it for quite a while. It worked great! I was a Guinea Pig in some kind of research trials. Was very young then, don't remember all the details, but I think we had to give the machine back to our doctor after about a year of use. But then we graduated to one of the fancy machines that had a red LED digital readout. I still vividly remember the Dextrostix and water squirt bottle!