Hospice is catch-all phase for end-of-life care, with a focus on easing suffering—physical, emotional, and spiritual. Hospice is actually covered by Medicare and most other insurance, the only requirement being the expectation that you’ll be dead in six months.

The official line is “clinical findings that support a patient’s life expectancy of six months or less if the terminal illness runs its normal course.” Of course, if you want to torture your insurance company by living longer (and eating into their profits) your doc can recertify you if you are still alive at the end of six months. That sometimes happens.

Recertifying more than once is rare.

My rules for diabetic patients on hospice are pretty simple: don’t check your damn blood sugar and eat whatever the fuck you want.

OK, I exaggerate, but that’s the essence of my feelings towards diabetes and end-of-life care. About two years ago I had a home health aide call me in a panic. “Mr. Gonzales (not his real name) is insisting I go buy him a candy bar, what should I do?”

Buy him the candy bar, I told her.

Don’t worry, the cancer will kill him long before his blood sugar will get the chance. It’s OK. Go. Buy him the candy bar.

Modern medicine suffers from a lack of balance at times.

I recently got a new patient. She was on hospice for three fucking years. Three. That’s six recertifications while waiting to expire. She must really hate her insurance company.

She was dying, no shit, of diarrhea. Uh… OK, so that was a really bad choice of words on my part. She was suffering from severe, chronic, mystery diarrhea so horrendous that she was malnourished. Every test in the world had been run. Blood tests, MRI’s, CT scans. Numerous specialists were brought it. I think they even consulted an Ouija Board.

One of the docs involved told me the diarrhea was so severe it reminded her of chlorella. But the patient was negative for chlorella too.

Until my boss got on the case, no one could figure out what was causing it. It turns out the recipe for this woman’s near demise was four atoms of carbon, eleven atoms of hydrogen, and five atoms of nitrogen. More on that in a bit. 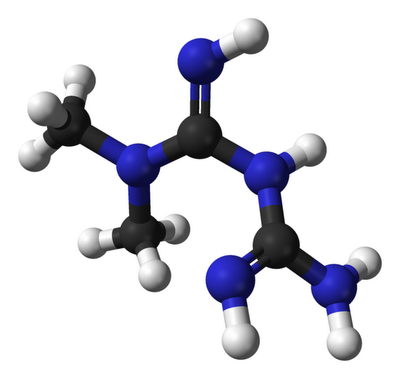 But first I want to take a detour into botany and history. Grab your keys, jump in your time machine and fire it up. Let us go to 1920.

What’s happening in diabetes in 1920?

Yep. This is before insulin. Not only is there no cure for diabetes, there isn’t even any treatment. Of course, diabetes didn’t kill most diabetics. Starvation did. To pull every day of life out of their patients, the diabetes experts of the day literally starved their patients to death.

Remember what I said about lack balance in medicine?

Well, we all know about Best and Banting and insulin. But do you really think no one else was on the case? Ever heard of Werner and Bell? Or Slotta and Tschesche?

Me neither. They were barking up a different tree than Best and Banting. Well, not a tree so much as a plant. While Dr. Banting was operating on stray dogs, Werner and Bell were stopping to smell the flowers. The lilacs, to be precise. 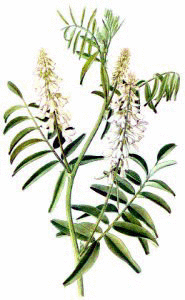 Various scientists played with galega officinalis, a.k.a. the French lilac, a.k.a. Goat’s rue, from 1920 onwards. Folklore dating back to the Middle Ages had long held that the plant could lower blood sugar. The only problem is that it’s toxic as hell.

As a complete side note, it may or may not interest you to know that here in the States, galega officinalis is listed on the Federal Noxious Weed List (I didn’t even know there was such a list until I started researching this subject).

Anyway, as insulin improved, other approaches were over shadowed. Galega officinalis was shelved. Until Type-2 diabetes started expanding.

Actually we T-1s aren’t wild about them either, especially if you look back at those harpoon-sized needles we used to use: 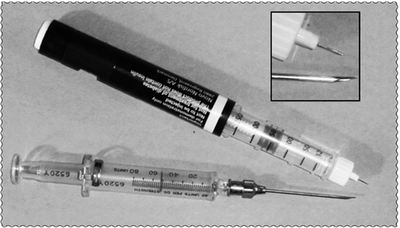 The difference being, of course, if our kind doesn’t take the shots we die. Type-2 can die too, but it takes a looooooooong time and that leaves lots of wiggle room. And an opportunity for pills. Motivated by the prospect of easy money, pharma scientists started looking at past research. Not for drugs that would keep T-1s alive, there was insulin for that, but for something else. For something than could lower blood sugar just enough to keep the T-2s alive and kicking.

Among other things, the French lilac got a second look. It was turned into a pill and by 1957 the first clinical trial was conducted, ironically, in France.

It was first in a class of drugs that would become known as the biguanides. Ironically, this med was shelved a second time when a sister drug in the same class caused a handful of deaths after it hit the market.

The French lilac again collected garden dust until the mid 1970s when new studies showed it was more than 20-times safer than its killing cousin. France again took the lead, approving it in 1979. The FDA took longer. It hit the US market in 1994.

It’s trade name was Latin for sugar eater: Glucophage. It is now generic and is known more commonly by its technical name: Metformin. It is the de facto first line medication for T-2 diabetes, with over 42 million prescriptions written for it last year in the US alone.

Metformin had one recognized side effect. Rare but serious. So rare, in fact, I’ve never met a doc who’s seen it in the flesh. But so serious that it is debatable whether it makes more sense to call an ambulance or call a hearse. Especially in those with comprised kidney function, metformin can cause lactic acidosis. I won’t bore you with the details, but trust me when I tell you that you really don’t want a case of lactic acidosis.

On the opposite side of the coin from death is life, and metformin has the bad habit of making women more fertile. I was running an oral glucose tolerance test on a young woman just last week. She’d been put on metformin (not by us) for pre-diabetes. No one told her it would bump her fertility up. Oops!

Oh yeah. Metformin has one other side effect too. It can cause upset stomach, especially when you are just starting out. This is why we generally start people off with little baby “sub-therapeutic” doses and titrate them upwards.

Now, remember my woman on hospice? The one with three years of ultra severe diarrhea so bad it was killing her?

My boss, who does hospice work on the side, was looking at her med list. She’d been on metformin for over a decade. But, what the hell, he figured. Metformin sometimes causes diarrhea. He ordered it stopped.

And three days later she was fine.

After three years of hell, after dozens of tests and doctors visits and consults and specialists, it turns out her problem was caused by a humble, $4 generic diabetes medication.

She’s off hospice. We started insulin to keep her blood sugars at bay. She’s back from the dead, or at least from the expectation of dead soon. She certainly has her life back.

So now she can at long last relax and smell the flowers.

But just not the lilacs.

Blimey! What a remarkable case. I also didn't know that's where metformin came from. Thanks for posting such an interesting article!

AND NO MORE CANDY BARS for her - LOL. WOW, great post. I just found you through "Trying to be Human". She posted on your CGM book.

I love your humor and your candor. I tend to drop a few "f" bombs myself. :)

Holy crap! That is nuts Wil.

uuuggghhhhh! i have no words...

Wow - Great story
Thanks for sharing

Thank goodness your boss took the time to look at that women's medication chart. It never stops amazing the impact of medication and food on a person’s body; both positive and negative impacts.

Is this the case you told me about?

Thank you for all the background information on metformin. A small percentage of us just can't handle it without major implications on our life and career.