So recently a young lady from the JDRF visited me at my clinic. She had come to see what we might need to help our patients. Among other things, for those of you who feel this organization has ignored adult T-1s (both the little ones that have grown up and those of us diagnosed as adults) she left a few copies of a book titled the “JDRF Adult Type 1 Toolkit.”

Now, I confess, I’ve not made time to read it yet, but it sounds very promising.

Of course, their main focus remains on the kiddos. My visitor asked how I was set for “bags of hope,” of which the signature element is Rufus, the bear with diabetes. I hope you all have a Rufus of your own. Rufus is a teddy bear of the classic design, but he sports a diabetic alert bracelet and has red patches on his paws to show where he should do a paw-prick to check his blood sugar. Other colored patches on his body indicate where he should take his shots.

For a brief history, Rufus was the brain-child, or brain-bear, of Carol Cramer. She created the first one in the early 90’s when her small son was dx’d. She actually made and donated over a thousand of them out of her own pocked.

Then she turned to the JDRF, who along with support from Pharma (originally Bayer), Medic Alert, and a toy company, ramped up production of over 15,000 Rufi and his sister girl-bear Ruby.

Rufi vary, depending on the generation, but generally sport a pair of tan corduroy overalls and a T-shirt. The current model has a JDRF/ Roche T-shirt. Presumably, someone at Roche has been filling out purchase orders for massive numbers of teddy bears.

Oddly, Rufus has been down-sized. Originally he was about a foot-and-a-half tall or so, now he is more of a pocket bear. I guess even bears are affected by the crappy economy.

From personal experience I can tell you that, for a child, having a stuffed animal who has to go through all of the diabetes crap with you is invaluable. But for that story we need to turn not to a bear, but to a lamb.

One day, several years ago, one of my elderly T-2 ladies brought me a stuffed lamb. I have no frickin idea why. At least, not at the time. The universe functions in the oddest of ways. Lamb sat on my bookshelf for months. Somewhere along the way Lamb ended up wearing a medic alert around her neck.

Then, in the summer of last year, a young mother brought in a very sick two year old girl. She had been losing weight. There were behavior problems. She had started wetting the bed. I think you all know where this is going…

So my new little patient latched on to lamb at her first visit, and on the next visit I thought lamb looked a little pale. So I checked Lamb’s blood sugar. And sure enough, Lamb was above target. So we gave her a shot. Then I checked my blood sugar. And, damn those brownies, I needed a shot too. So, what the hell, we’re checking everyone’s blood sugar, we might as well check the little T-1s blood sugar too, huh?

And that became the office ritual. We’d check Lamb, then me, then the little girl. When we were able to get my little patient a CGM, Lamb came in the week before sporting a cardboard CGM on her belt.

Sometimes it does not matter what boat we are in, so long as we aren’t in it alone.

I was amazed at how much support the stuffed animal gave the little girl.

So I definitely wanted a Rufus or two on hand. You know, just for in case. But, only half joking, I told the JDFR rep, well, no one gave me a Rufus when I was diagnosed.

Four… decades. I was 40 when I was diagnosed.

But two weeks later a box showed up at the clinic with my name on it. 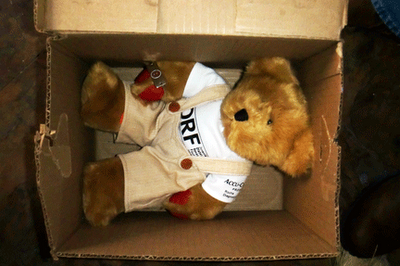 Yep. Almost a decade late, but better late than never, a Rufus of my own.

So I wasn’t sure whether to keep Rufus in my office to help me with patients, or whether he should live at home with Debbie, Rio, the cats, and me. I took him home to show him off, and well, he never left. He’s the perfect size to cuddle. Kinda like holding a baby. Only without the slobber and the hole-fear-of-dropping-on-head thing. And his fur is softer than a cat’s.

And you know what I discovered? At the end of a crappy day, you are never too old to hug a teddy bear.

Rufus. The bear with diabetes. Good medicine for diabetics of all ages.

hey now! I didn't get a Roofus or a Ruby when I was diagnosed either and I WAS of the appropriate age! LOL Go Figrue! :)

LOVE IT! nice post, made me smile and giggle lol

Wil - Great post. Rufus was sent to my 6 year old when she was dx'd 2 years ago and honestly, it did more for her emotional health during those first 6 months than I could ever do. He came everywhere with us and was always the 1st to get his shot or check his blood sugar. I truly have come to love the guy, who still sits proudly at the end of my daughter's bed, and now has an OmniPod pump taped to his bottom :0)

For me, there was no Rufus. Still isn't. To me, it's all about Froggy! Well, whether it be a bear, frog, or lamb, it's all good - great post, Wil! Truly awesome! (Now, going to go try and reassure my boss that my mass laughing and smiling at this blog post is, indeed, work-related...) Maybe I could buy her off with a Rufus bear? Hmm.

"Sometimes it does not matter what boat we are in, so long as we aren’t in it alone."

I love that Wil. There is so much truth in that statement.

For Joe it was LuLu a Webkinz Polar Bear. He sported an animas pump made by yours truly...had a real pump site... etc. I wrote a post on him once...titled "More Than Just Stuffing" - appropriate don't ya think?

Wil, I never got a bear either. Mind you I don't think they like the climate in Ireland.

Thanks for the laugh, I needed it!

Thanks for the post, my son received one in the ICU when he was diagnosed 9 months ago, we are still battling the ups and downs but Rufus been a blessing for my son and myself. Yes, I hug the bugger too! You are never to old,lol.