One if by land…

Sara squinted, staring at my chest, “It’s cool. How old is it?”

I’m not sure exactly, the eBay description just said ‘vintage.’

No ‘vintage’ means it was made after I was born, but before you were born.

I was showing Sara--one of our half-time-at-the-clinic in scrubs Medical Assistants; half-time-on-one-of-the-ambulances in combat boot and black cargo pants EMTs--my latest eBay find.

Nope, not a pipe.

Nope, not a microscope.

Actually, I haven’t worn any jewelry since I got the tattoo. Maybe I just needed a break. Maybe it was time to wear more than just a tattoo. Maybe I’m just a sucker for something that strikes my sense of beauty.

But here’s how it went down: a while back, near my birthday, I spotted a three-foot carved wood caduceus on eBay. The detail was stunning. It was bought in Germany about 25 years ago by someone in the service. Would have looked great on my wall. I bid as high as I dared, plus about 75 bucks more, but some low-down dirty snake beat me by five bucks. I hope it looks good on his wall (not).

Anyway, every once and a while I search eBay for “caduceus” hoping that it freaks out his wife so much she lays down one of those “the snakes or me” kind of ultimatums. No such luck so far, but I stumbled onto this beauty. Technically, this one is a staff of Hermes, but who’s counting? (Note for detail freaks: the caduceus has two snakes on a winged staff, and the staff of Hermes has one snake on a staff with no wings. Technically, the single-snake model has deeper roots in the history of medicine; but in the American tradition of more is better, the two snakes with the winged staff have been the de-facto symbol of all things medical in the USA for over a hundred years.) 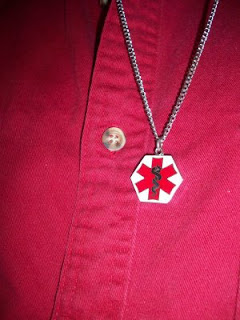 I’ve seen a lot of various types of medic alert stuff for us D-Folk, but never one quite like this. It is silver with white and red enamel fill. One of my patients spotted it and recalled that her grandma wore one like it (Type-2 is an inter-generational affair around here).

I love the look of this pendant, and it has a good vibe. I gotta admit, I love the caduceus/Hermes symbol. For most of my life I thought it was the private property of docs and medics and the like. But most medic alert stuff also has the symbol. That’s when I realized: IT IS OURS too. Just like it is OUR diabetes. I’ve adopted the snakes and winged staff with no guilt, symbolic of the way I think we D-folk need to take our diabetes back from the medical folks, the insurance folks, and the government folks. Diabetes is a self managed disease. Time we all get off our duffs and take it back. Time we manage it with the HELP of all of the folks above. Stop taking orders and start taking responsibility.

And one of our responsibilities is to wear something that lets the authorities know who and what we are if we get into trouble.

Recently my buddy Fox passed through on her appointed rounds. Fox, as you may recall, is a meter rep who calls on my clinic and is also my kinswoman: a fellow T-1.

Where’s your alert jewelry? I ask her every time she visits.

To which I get the usual litany of excuses. Where upon I give her my stock lecture about traveling T-1s and hypos and cops beating the crap out of our hypo kinfolk (and this was before the latest high profile incidents on CNN).

But I think it was the flu shot that finally gave me creditably with her. At the start of flu season I basically told her she could spend the rest of her natural life in my office, or get a flu shot. She opted for the flu shot, which is kinda of a shame because she would have done a lot for the décor of my office. Anyway, her hub caught the flu a few weeks later, suffered miserably, and she got off without so much as a sniffle. I guess she figured if I was right about the flu, maybe I was right about the medic alert stuff.

I got an email from her: “Hey, I am the proud owner of a fancy new medical alert bracelet!”

I asked her to send me some pics of her new bling. Here is the girly side… 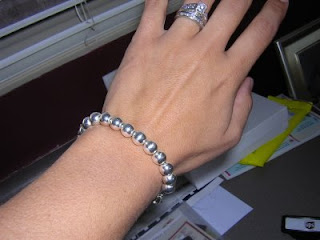 ….and the business side…. 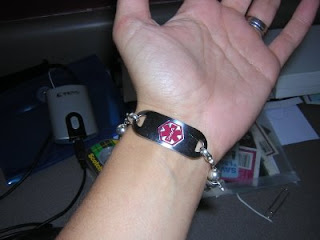 Meanwhile a D-mom who is a reader emailed me a pic of her son Zack’s new alert tattoo. It’s based on our open-source tat here. His is bigger than mine with some style tweaking to fit his own image. Two of my Peer Educators are planning tattoos too, but so far it’s all talk. 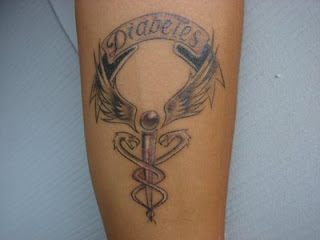 If you don’t do it for yourself (and why wouldn’t you?), do it for your Type-3s who love you even when you are stupid. Or hypo. Or both.

Now in one of the recent high profile D-tasing incidents, our poor kinsman had a necklace on, but it was hidden by his clothes. Which brings me to the indispensable accessory for your car: the Diabetic Driver sicker from www.dadinnovations.com which is money--and not much of it--in the bank. This is a cool-looking sticker that shines at night like those little reflectors by the side of the road. Bottom line: when the cops flash their mag-lights in the windshield (while whipping out their tasers) it’ll glow: don’t shoot me, I’m sick, not stoned.

So here’s the deal: show me your alert! Email me a picture of how you show your colors to the world. I’ll pull together a nice little album and, like, post it.

PS: Almost forgot, I have a correction to make. Jonah is right in his comments last week. That’s what I get for doing math in the middle of the night. By candlelight. While drunk.

I mixed my apples and oranges on my clever little analogy folks. T-1s run 5% of diabetic population. But by taking out five pennies in my example, I increased us from 5% of a sub-population to 5% of the total population, thus I greatly increased our population. Yes, it was a blatant power grab on my part.

So what I should have done was set 8 pennies aside for all D-folk, both T-1s and T-2. That ends up changing the answer on the word problem, but it still boggles the mind.

Think how much power we’d have if we voted as a block!

I do wear a medic alert bracelet (and have for a long time).

But I was really concerned after that latest incident that you mentioned. I worry that the "authorities" may not notice the bracelet before shooting me with something.

I think it is great that you wear your necklace (and it is a nice necklace btw) outside of your shirt. Do you wear it like that all the time? I don't know if I like any of the necklaces enough to do that though. Maybe I just haven't found the right one. And I'm not really a necklace guy either.

That latest incident has me worried that my bracelet is not enough. I feel I need more protection. Maybe I'll get a nice tattoo on my forehead. That glows in the dark.

Thanks for the link on the car stickers, I will be ordering some of those up.

I love my medic alert bracelet. I asked for it for Christmas last year!

You can see my sweet diabetes tattoo here. I really should take another picture so you can see it now that it's healed up.

I just saw that Oklahoma (El Reno) Diabetic Driver getting beaten by cops, on CNN.com. They told him to stop resisting, when he was still(Not answering is not resisting). Even the spokesperson did not sound too contrite. An EMT relative says they do a "pat down" from the head down to ascertain the cause of the lack of consciousness, including looking for medic alerts. All cops need to do that and be a little more patient, and a lot less angry. There was nothing( done by the "Diabetic" in that episode that would have been construed as a risk to the cops.

I just saw that Oklahoma (El Reno) Diabetic Driver getting beaten by cops, on CNN.com. They told him to stop resisting, when he was still(Not answering is not resisting). Even the spokesperson did not sound too contrite. An EMT relative says they do a "pat down" from the head down to ascertain the cause of the lack of consciousness, including looking for medic alerts. All cops need to do that and be a little more patient, and a lot less angry. There was nothing( done by the "Diabetic" in that episode that would have been construed as a risk to the cops.