Debbie, Rio, and I have a pet skeleton. That sounds kinda weird, doesn’t it?

Well, here is how it happened. Once upon a time my clinic had an award winning school-based clinic at the local high school. This worked great for everyone until a bunch of conservative religious nut-cases took over the school board.

Now remember, we in health care tend to be liberal. I don’t want to insult anyone who feels otherwise, and I personally respect all view points. But when it comes to children’s health I strongly believe we need to do what is necessary to protect it.

And that means if a 13-year-old girl asks a school nurse for condoms, I think we should give them to her and be grateful she asked.

Others disagree. Others believe that if you give out condoms, kids will run out and have sex. These others believe we should only council abstinence. To keep our federal funding our nurses are actually required to council the “A-B-Cs” to any one who comes in on any kind of heath visit that involves anything remotely connected to sex. “A” is for Abstinence, “B” is for Be faithful, and “C” is actually (surprisingly) for Condoms. It has to be done in that order. I hear nurses saying, the federal government requires me to tell you…So the message from the Feds is: don’t have sex, and don’t have sex with only your wife/husband, and be sure to wear a condom when you aren’t having sex with only your wife or husband.

I need a drink.

Actually I have no problem with counseling abstinence. But I still think you should provide condoms, and make young people aware of them. They are cheaper than teen pregnancies. Cheaper than STDs. Condoms save lives, in more ways than one.

Anyway, we got kicked out of the school shortly before I started at the clinic. Then I walked past my bosses’ door at just the wrong time. You see, we had a couple of thousand dollars of grant money that had to be spent or returned. “How would you spend a couple grand on diabetes and children in the school?” she asked me. And without thinking too much I blithefully said I’d finger stick every kid in the school system.

I had no idea what a can of worms I had just opened. A finger stick, which we all take for granted as a simple daily part of life is technically an invasive medical test.

What followed was months and months of attending school board meetings, PTA meetings, meeting with parents. It actually took me nine months to give birth to this little project, which is kinda ironic when you think about the genesis of the funds for it.

But in the Spring of 2007, right before the end of school, we did finger sticks on all kids from the fifth grade through the 12th. We also did BMIs and blood pressures. And the results scared the hell out of everyone and were far worse than I had ever imagined in my wildest nightmares.

I won’t even depress you with the numbers, but the assistant superintendent of the schools came to me and asked, “what can we do?”

And I replied, Change society as we know it. To which she said:

I really gotta learn to keep my mouth shut. So over this last year we’ve put together a health education program that will be taught in the schools by clinic staff. At first it was just going to be healthy eating and exercise and the like. Soon, however, it became apparent that this information in a vacuum was worthless and it evolved into a broader based understand-your-body-understand-your-health program that would cover life, the universe inside of us, and everything.

As we had significantly elevated blood sugars and pressures in 5th graders we decided we had to go to the source of the Nile. We’d start with the pre-K kids. Next, looking at our resources we decided it was “too late” to change the older kids. Coldly, cruelly, we’d write them off and try to save the next generation. Our program rolls out pre-K through 5th grade only.

I hope to add one grade per year. I child in pre-K this year will see clinic staff a couple times a month through high-school graduation and we’ll have no idea if this worked until… oh… after I’m dead.

Next I knew we had to make learning fun. So I went on a quest for cool visual aids to make health and the human body fun, which it is. And I had to make it age appropriate. One of the things I bought (on eBay, of course) was a pygmy skeleton. Don’t freak out. It isn’t a real pygmy. Or even a real skeleton. It is a “Mr. Thrifty” skeleton made by Anatomical Chart Company. Very real, very detailed, about a yard tall. Same size as most pre-K kiddos.

I bought it used from some guy who was also selling a leaf blower, a Dallas Cowboys sweat shirt, and a set of unused dishes that probably came from his mother for Christmas and were detested by his wife. The skeleton was labeled as used, excellent condition, with original box. I love ACC, but this would cost me less than half of what a new one would set me back, and that would give me more money for other stuff. I hit the Buy It Now button and paid for it from my PayPal account. I planned to submit the receipt for reimbursement later. That, as it turned out, would never happen.

The skeleton arrived the next week. In great shape, in the original box, as advertised. I pulled him out, annoying little bits of Styrofoam floating everywhere. I attached his legs and set him on one of the library chairs while I put the stand together.

His head flopped to one side. On inspection something wasn’t…..right….about his neck. I got the sneaking suspicion that my new educational, scientific, highly accurate pygmy skeleton was hung by the neck until dead as a Halloween decoration.

After several failed experiments, Dr. Lee fixed the patient’s neck by stuffing some of the aforementioned foam peanuts between the mandible and the cervical vertebrae (think throat). He looked kind cute on the chair, so I crossed one foot over the other and put his hands behind his head.

He was a big hit with Debbie and Rio; who has an unusual interest in, and an extraordinary knowledge of, human anatomy—no doubt a legacy of having a father with a chronic illness. In discussing visual aids for the kindergarten my boss said, “You know Rio’s not a normal kindergartener, are you sure that normal children will be interested in this?” Granted, probably most kindergartners don’t know where there liver is and what it does; much less be able to properly identify all the major organ systems in the body, but I think all kids are interested in what’s under the skin.

The next day I found the skeleton calmly smoking a “cigarette” in the form of a kitchen match, one knee up, one hand on his hip, the other arm resting on the chair’s arm rest.

Last night, when straightening out the house I set him up like this: 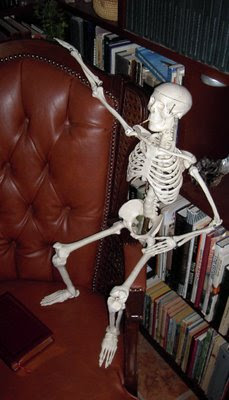 I wouldn’t be surprised to find him watching TV in the living room sometime next week.

“What’d this little guy set you back?” asked Deb.

Oh…I don’t remember exactly, twenty or twenty-five bucks. About half what Anatomical wants for them new.

“Don’t submit the receipt for a little while,” she said.

About two weeks later I said to her, the pygmy skeleton is never going to see the light of day at my office, is it?

Well, then we’d better name it.

Now I don’t know if it is male or female. Physical anthropologists and skeletonologists and probably even my medical director could take one look at the pelvis and tell me; but it is hardly worth the effort. Depending on the pose it can look quite feminine or quite masculine. We needed a gender neutral name.

After considering Addison, Devon, Jaime, Logan, Riley, and Tyler, we settled on the obvious: with apologies to Gene Roddenberry and DeForest Kelly we named our pet skeleton Bones.

Hehe! Great story Wil - the picture of him hanging out next to the chair made me grin.

I think you're going to have to post the occasional Bones picture so we know what he's up to to.